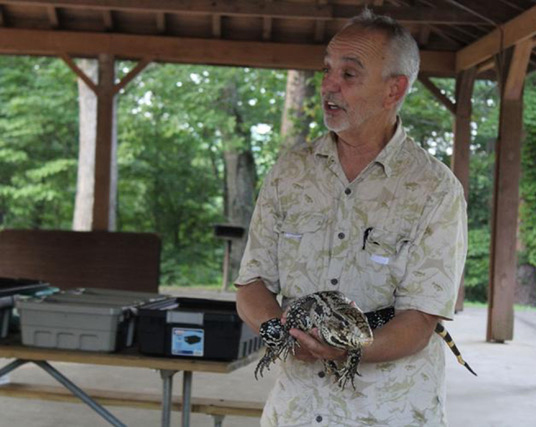 Naturalist Scott Shupe began his professional career in 1971 at the famed Ross Allen Reptile Institute and Venom Laboratory in Silver Springs, FL where he worked extensively with venomous snakes both as a venom extractor and curator. He later he worked at the St. Augustine Alligator Farm in St. Augustine, FL. In the early 1980’s he worked under contract with Reptile Gardens in Rapid City, SD where he conducted the Birds of Prey Show. From 1992 to 2002 he partnered with the Knight & Hale Game Call Company in Cadiz, KY and worked as director of The Woods & Wetlands Wildlife Center, a private zoo/nature center. He is the founder and original owner of the Natural History Educational Company, an organization of professional naturalists that provided live-animal wildlife education programs to thousands of schools and libraries throughout the United States for nearly thirty years. From 2005 to 2017 he enjoyed an association with the Kentucky Reptile Zoo and Venom Laboratory in Slade, Kentucky, traveling to schools and libraries with his World of Reptiles program.

He has served as a host and narrator for wildlife related television programming (In the Wild-Outdoor Channel), produced educational life science videos, and has appeared as a guest naturalist on a number of public television programs and satellite networks. He has been recognized for his contributions to conservation education by the U.S. Fish & Wildlife Service, named naturalist of the year by the Kentucky Society of Naturalists, awarded the Jesse Stuart Media Award by the Kentucky School Library Association on two occasions and received the Environmental Stewardship Award from the Kentucky Environmental Quality Commission. From 1987 to 2018 he contracted annually with the Kentucky Department of Parks to provide naturalist programming in state parks across Kentucky.

He has written for outdoor and nature periodicals and scientific journals and his wildlife photographs have appeared in dozens of nature magazines and books. He has recently completed a contract with Skyhorse Publishing (NY) producing a series of state wildlife encyclopedia and has authored for that publisher wildlife encyclopedias for the states of Kentucky, Ohio, New York, Illinois, and Florida. His previous publications include U.S. Guide to Venomous Snakes and their Mimics; Venomous Snakes of the World, A Handbook for Use by U.S. Amphibious Forces; and North American Bird ID Checklist.

A free-lance naturalist with nearly forty years experience in a wide array of nature interpretation, wildlife tourism, education, zoological exhibits administration, writing and wildlife photography & videography, he currently describes himself as a dedicated wanderer who roams the continent in search of new species to photograph. He recently completed a three month contract as the seasonal naturalist for the Desert Tortoise Preserve Committee in southern California’s Mohave Desert.

His new website, “ShupeWild.com” is intended to serve primarily a repository for his thousands of wildlife photographs which are available to researches, scientists, naturalists, educators, media outlets and publishers upon request.